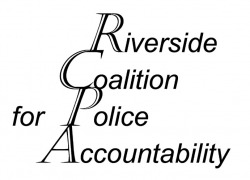 The Riverside Coalition for Police Accountability is a grassroots coalition and political action group in Riverside, California.  It was formed in January 1999, in response to the death of Tyisha Miller.  The RCPA is committed to improving relations between the Riverside Police Department (RPD) and the community.  We are dedicated to establishing public accountability for the RPD and believe that the RPD should serve all people of Riverside regardless of race, ethnicity, age, economic status, gender, sexual orientation, handicap, or religious belief.

Our founding principles are that independent public review can provide a credible, unbiased source of police accountability.  Public oversight and review of police policies, procedures and actions will help build better relations between the RPD and the diverse community it serves.